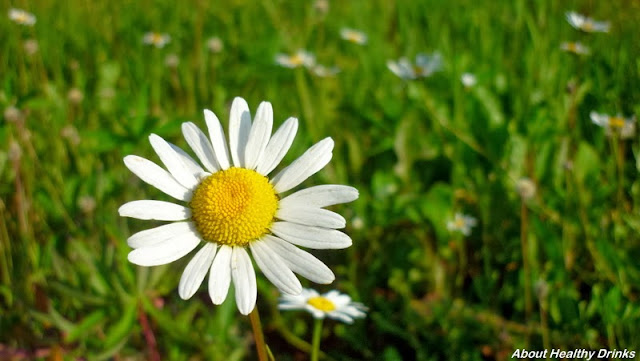 Chamomile is a daisy-like flower, a member of the family Asteraceae. Chamomile tea is often used to fight fevers, colds, anxiety, insomnia, and anti-inflammatory. This herbal tea has palliative effects on the intestine, uterus, stomach’s muscles and support digestion. I like chamomile tea and wanted to know more about this healthy drink. But I surprised with what I found about this tea. The truth is chamomile tea is not safe to everyone. And the biggest surprised is there are few researches on the effectiveness of chamomile and whether it works or not in human. Most research’s evidence we have comes from animal studies, not studies with people. For this reason in this post I’d love to share with you what I found and learnt about benefits and side effects of chamomile tea.

Home Remedy for Fevers and Cold

Chamomile tea is ideal for treating fevers, and colds. This tea can ease cold and flu’s symptoms by reducing fever, relieving headaches and mucus. You can combine chamomile tea with some honey to reduce sore throats. This combination can make you feel relax and breathe easier.
Natural Anti-inflammatory tea

Chamomile tea is rich anti-inflammatory ingredients. The tea helps the body to heal the wounds and sooth inflammation. Animal studies have shown that chamomile reduces inflammation; speeds wound healing, reduce muscle spasms. But there are very few studies to see if the tea works as though in human. In another test tube, studies have shown that chamomile can kill bacteria, fungus, and viruses.
Herbal Remedy for Anxiety and Natural Sleep remedy

Chamomile is used to relieve restlessness, tension, anxiety, headache and insomnia for a long time ago. The tea can serve as a mild sedative to help with sleep and relaxes. You can find chamomile tea in the ingredient of almost sleeping herbal teas. But, so far there has been only one clinical trial using chamomile to treat anxiety in people. The scientists found that chamomile capsules can reduce anxiety in generalized anxiety disorder patients. In other animal studies, low dose of chamomile was proved to relieve anxiety, while higher dose helps you to sleep well. With me, I often have one cup of chamomile tea before sleeping for better and deeper sleep.
Add Digestion

Chamomile is often used in a cream or ointment to soothe irritated skin. Chamomile compresses are touted for backache and treatment of the skin against dryness. Inhaling the vapors from a chamomile infusion it clears the bronchi and acts against acne of the face. Chamomile also can soothe eczema. In two studies in people found that a chamomile cream helped relieve symptoms of eczema.

Side Effects of Chamomile Tea

Chamomile is generally considered safe and nontoxic. But allergic reactions to chamomile are fairly common. Be careful when using chamomile tea if you have allergy to ragweed, purple cone flower, sunflowers, dandelions, marigolds, sagebrush or other members of the Asteraceae family. The chamomile allergy can lead to stomach cramps, itching, skin rashes and throat swelling. It also can cause serious problem with breathing, and even dead. Before using chamomile you should ask your physicians and read the instruction label carefully. Stop using chamomile tea when you got any allergic symptoms.
Using a small amount of chamomile tea can relieve nausea. But a large amounts of  highly concentrated chamomile tea may cause vomiting. And here are some notices you should consider before using chamomile tea.
Interact with blood medicines

Chamomile might increase the risk of bleeding when taking with blood-thinners medicines. These medicines include
– Warfarin (Coumadin)
– Clopidogrel (Plavix)
– Aspirin.
Do not use chamomile tea with  other substances that possess anticoagulant action. As it can interfere with blood clotting.  Besides, taking chamomile tea with drugs for high blood pressure could cause blood pressure to drop too low.
Chamomile may also lower blood sugar too. People who have diabetes should take chamomile tea carefully. When using it with diabetes drugs, it could raise the risk of low blood sugar.
Stop drinking chamomile tea at least 2 weeks before having surgery or dental surgery.
Chamomile and women: Chamomile may act like estrogen in the women body. Ask doctor’s advice before using chamomile tea if woman has a history of hormone-sensitive cancers, breast or uterine cancer.
Pregnant women should avoid chamomile because of the risk of miscarriage during pregnancy. The tea can lead to early uterine contractions and miscarriage. During pregnancy women also should not use tincture or essential chamomile oil version. These products may increase the anticoagulant effects in pregnant women.
Chamomile and children:

Chamomile tea is strongly not recommended to the newborns by both herbalist and physicians. Chamomile’s sedative effects may be too strong for a young baby because the risk of botulism poisoning.

Children under 5 should not take more than half a cup of tea per day.
You should always ask your doctor before giving chamomile tea to children. Children might have serious and severe allergic reaction, breathing’s difficulty, skin hives, unconsciousness, etc.
Risks of drowsiness: You should avoid taking the tea if you are driving or operating machinery. Because the tea has mildly sedative and anti-anxiety properties and it may cause you drowsiness.  It is unwise to drive shortly after having a cup of chamomile tea.
Medication Interactions:

Avoid taking Chamomile in conjunction with alcohol and sedative medications.  Our liver break chamomile down in the same way with other drugs. If we drink chamomile tea and drug in the same time they may interact each others. These drugs are:
–  Fexofenadine (Seldane)
–  Statins (drugs that can lower cholesterol)
–  Birth control pills and some anti fungal drugs
–  And other blood medication drugs

How to use chamomile tea?

One thought on “Chamomile tea: Health Benefits, Side Effects and Uses”