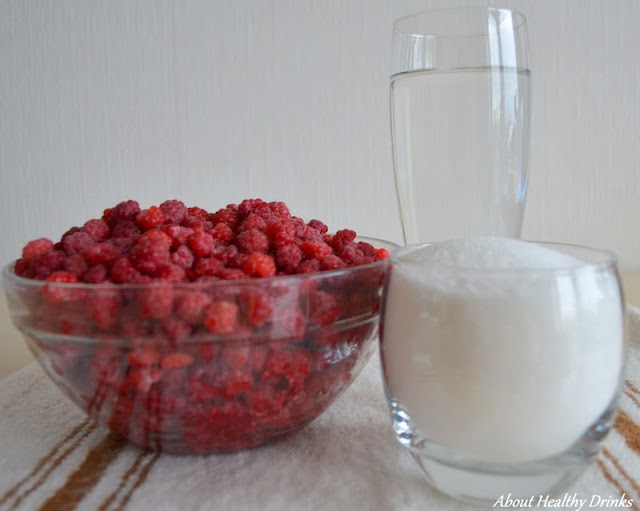 Summer time is the great time to pick red raspberry in Finland. As I mentioned in the post ‘‘Healthbenefits and usages of Red Raspberry’’ I collected a lot red raspberry in summer time. For that reason, I had to think about how to use effectively my fresh red raspberry. Besides frozen red raspberries, making low sugar jam is another good ways to use a large amount of red raspberries. It’s quite funny to say that making jam has become my new hobby since I live in Finland. I love to make jam from all types of berry like red raspberry, strawberry and blue berry. It is very nice to have a breakfast with summer jam in a very cold and dark winter morning. Now, let start to do my favorite low sugar red raspberry jam.
Ingredients:
I don’t use the traditional recipe to make jam with 50 percent of sugar and 50 percent of fruits. Instead, I make low sugar jam with 30% of sugar and 70% of fruits like red raspberry, blue berry and strawberry. I try not to eat much sugar because it is not good to body and skin. I have tested so many times to make jam with lower sugar at different percentages but nothing is as good as 30:70 percentage. However, the lower percentage of sugar I put in the jam, the shorter time I can keep the jam in refrigerator. My jam’s refrigerated life is 4 or 5 months shorter than the jam made with traditional recipe. If you want to keep your jam longer, you can use the traditional recipe with 500 gr of sugar and 500 gr of red raspberries.
In my jam, I did not discard the raspberry seeds because according to the website Berry health red raspberry seeds are rich in Vitamin E, omega-3 fatty acid and sun protection factor (SPF) of 24-50. But sometime it’s very uncomfortable when red raspberry seeds stuck in teeth. If you don’t like that, you can discard them while cooking jam by using strainer.
Step 1: Prepare the sterilized jars before you start to make a jam.
–          Place clean jars into the pot and boil jars over high heat for 10 minutes. Make sure the water is covered all of the jars.
–          Remove and drain hot sterilized jars one at a time by using jar lifters.
–          Turned upside down jars to make sure they are completely drained. 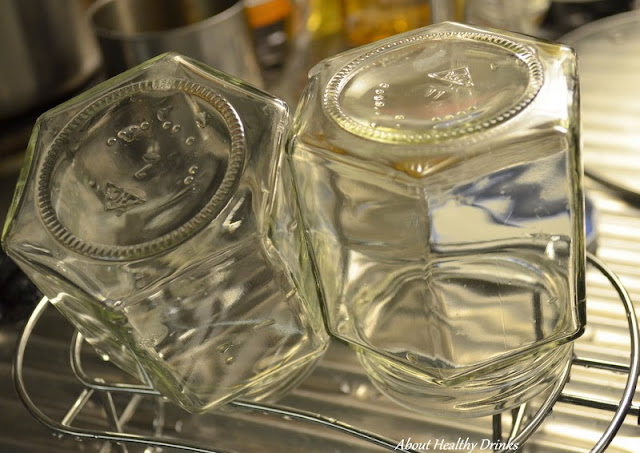 –          Do not boil the jar lids and lid rings because boiling the lid can cause problems in sealing jars. Just simmer the jar’s lids in boiling water for 10 minutes. Drain lids and rings and keep them aside the jars.
–          If you need to read more about sterilized jars you can see detailed information in the post’s references.
Step 2: Boil 200ml or a cup of water in the high heat until the water is boiling. Slowly add sugar and stir it until the sugar totally melted. After 5 minutes, the sugar is melted totally you can put lemon juice into the pot. The lemon juice will prevent the jam from mold and minimizes the loss of vitamin in red raspberries. 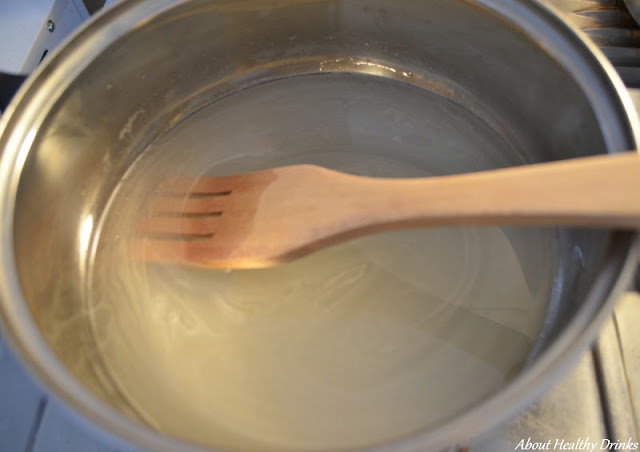 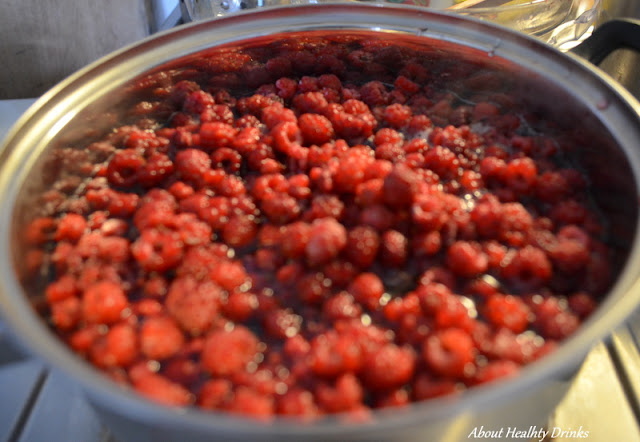 Place the pan or pot over high heat to boil the mixture and stir constantly. Skim foam from the pot’s surface. If you want to discard the red raspberry seeds, you can start to remove red raspberry seeds in this step.
Testing and checking jam until it done.  If mixture gets dry and looks like a gel it is ready. If jam is too thin and spreads, return it to pot and continue boiling it. This is my product after one and half hours. 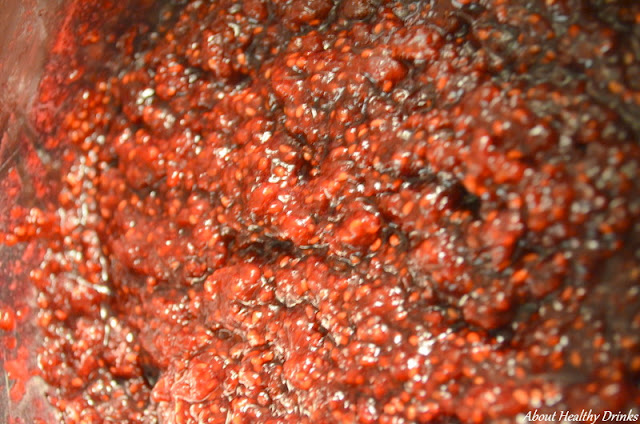 Step 4: Spoon your hot jam into hot sterilized jars and cover immediately with sterilized lids. Put lids and rings on jars and tighten; do not over-tighten. Once jars have cooled completely, test to make sure each jar is completely sealed. Press down on the middle of the lid with a finger. If lid springs up when finger is released, the jar is unsealed. When step 4 is finished, the red raspberry jam may be kept refrigerated, up to 1 month.
Step 5: If you want to keep your low sugar red raspberry jam up for longer from 4 to 6 months or longer, you need to do some extra work with your filled jars.
–          Boiling water in the pot or the caner which you used to sterilized the jars before.  When the water in the pot or caner be close to boiling or up to 180 degree, place filled jars into the pot. Keep the jars upright at all the times and water below the neck of the jar. Increase the heat until the water comes to full boil. Keep jars in the pot for 5 minutes. 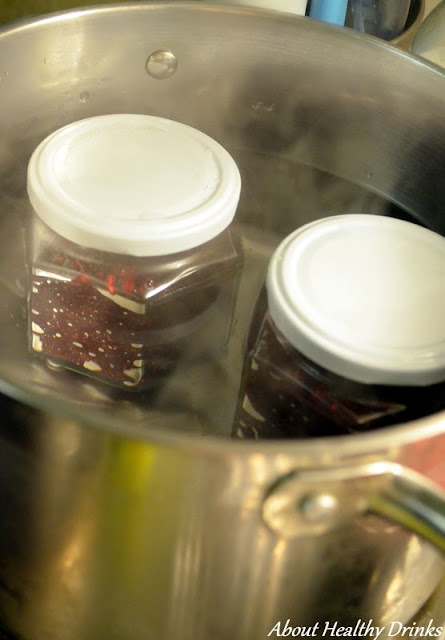 –                      After 5 minutes, turn off heat and wait 5 minutes before moving jars from caner to allow the boiling and jar content to settle.
–          Remove jars from caner and carefully place them onto towel or cake cooling rack. Keep space between jars and avoid placing jars onto cold surface.
–          Cool jars upright for 12 to 24 hours while vacuum seal is dawn and the jam is settle up. Do not push down on a center of the flat metal lid until the jar is completely cooled.
–          If you make jam with traditional recipe with 50:50 percentage, you can keep the jam up to one year after finishing step 5.
Here are my finished low sugar red raspberry jam jars 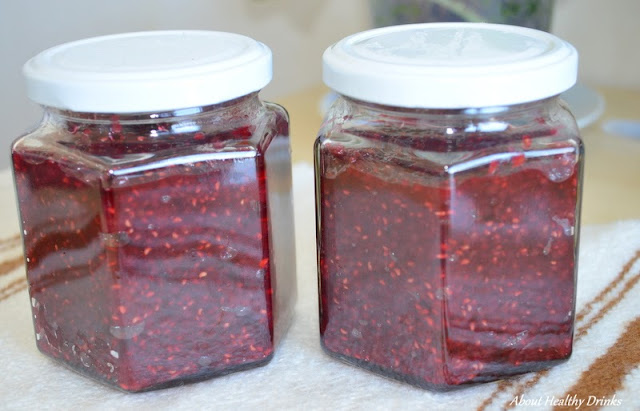 Notes:
·        I put sugar less than the traditional method so the jam will not be kept as long as the traditional jam recipe. As my own experience, if I kept the jam in a suitable way, I can keep my jam in good conditions from 4 to 6 months.
·        Once you open the can, consume the jam during 3 or 4 weeks. Keep the jam in refrigerator.
·        Always remember to check all home-canned jam jars before opening and eating. If there is any mold or any sigh of spoilage, discard the entire content of the jar or container.
It’s a little strange to read post of making jam in a healthy drinks blog, but I do love jam. Making low sugar red raspberry jam is one part of my experience of using red raspberry in efficient and healthy way. With me, low sugar red raspberry jam is the best jam ever. If you like this post, try to make low sugar red raspberry jam with my recipe. You will see the difference between your homemade jam and the jam you bought in supermarket. Let me know your opinion about this red raspberry jam recipe. I am very happy to learn from you more about making jam.
References